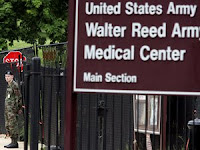 The Army has told some of the psychiatrists who supervised Fort Hood shooting suspect Nidal Hasan that it is investigating them. The results of the investigation could mean these doctors might face punishments, from letters of reprimand to court-martial. The Army said it’s going to decide whether the doctors at Walter Reed Army Medical Center “failed to take appropriate action” against Hasan and were “derelict” in their duties. Evidence shows that a lot of doctors had worried about Hasan — some for years.
Demonstrative Evidence at TrialResidual Hearsay