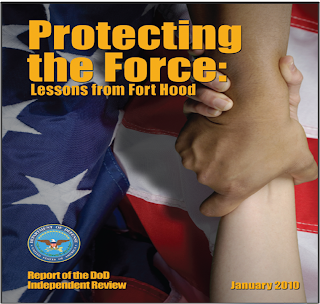 The Pentagon has released its report on the Fort Hood shooting. The full report is available at this link: Report. Once you reach the link, simply click on the “released at noon by the Pentagon” link in the third paragraph of the story.
It appears that several officers may be held accountable for the failure to identify MAJ Nidal Hasan as a threat. According to the Defense Secretary Mr. Robert Gates, “it is clear that, as a department, we have not done enough to adapt to the evolving domestic internal security threat to American troops and military facilities that has emerged over the past decade.”
United States v. EdigerPeace of Mind Legal Review