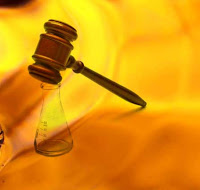 
In an unusual 5-4 split, Justice Scalia, writing for the majority, concluded that drug lab reports were within the core class of testimonial statements covered by the Confrontation Clause.


Under Melendez-Diaz, the Government can not use a drug lab report as evidence against an accused unless that accused waives his right to cross-examine the analyst who prepared the report. In reaching this conclusion, the Court emphasized that the Government “may not ignore constitutional rights simply because compliance is inconvenient or expensive.”
The question for us in the military is since lab reports are within the core class of testimonial statements covered by the Confrontation Clause, who does the Government have to call as a witness in a court-martial? We may have the answer to this question soon.
*
The CAAF in United States v. Blazier, 68 M.J. 240 (2009), is dealing with this very issue. The opinion has not been released yet, but the issue in front of them is whether the appellant was denied meaningful cross-examination of a government witnesses when the military judge did not compel the government to produce each lab official who handled the appellant’s urine sample and instead allowed an expert toxicologist to testify to the results of the lab report.