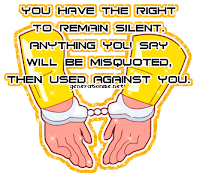 
Edwards v. Arizona (1981) bars police from initiating questioning with criminal suspects who have invoked their right to counsel. Shatzer was in prison when he was initially questioned. He was returned to the general prison population after he invoked the right to counsel.
Two and a half years later police reinitiated interrogation. On the second encounter, Shatzer waived his Miranda rights. Maryland courts suppressed the confession, but the Supreme Court reversed, and in doing so created an arbitrary period of 14 days in which Edwards’ prophylactic rule expires after a break in custody.
“Because Shatzer experienced a break in Miranda custody lasting more than two weeks between the first and second attempts at interrogation, Edwards does not mandate suppression of his March 2006 statements. Accordingly, we reverse the judgment of the Court of Appeals of Maryland, and remand the case for further proceedings not inconsistent with this opinion.”
Team Wounded Warrior ProjectDrug Lab Reports and the Confrontation Clause