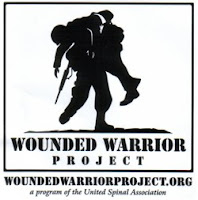 Here is a recent email sent from Team Wounded Warrior Project. If you can help, it would be greatly appreciated by your fellow brothers and sisters in arms:

During CPT Matt Cavanaugh’s two tours in Iraq, he saw fellow soldiers suffer devastating wounds and watched the impact on their lives and families as they struggled to recover. On Veteran’s Day 2008, he launched Team Wounded Warrior Project. He dedicated himself to raising money and awareness on behalf of the Wounded Warrior Project.

Since Team WWP’s creation he has raised nearly $45,000 and has become the Wounded Warrior Project’s top individual fundraiser. He has spoken to numerous audiences, received national press coverage, and touched millions of Americans through Team WWP’s efforts.

On February 25th Family and Morale, Welfare and Recreation Command selected Cavanaugh as the Army’s Athlete of the Year; the award was presented to him by Gen. Ann E. Dunwoody, commanding general, U.S. Army Materiel Command; Gen. Martin E. Dempsey, commanding general, U.S. Army Training and Doctrine Command; and Gen. Gordon R. Sullivan, USA, Ret., AUSA president. The award is given for his public service and superior athletic performances over the demanding 2009 Team WWP schedule that included the US National Cross Country Championships, marathons, and ultra-distance races from 50 to 114 miles. Team WWP’s goal is to help the more than 30,000 Veterans of the wars in Iraq and Afghanistan who have returned home without limbs, severe burns, Traumatic Brain Injury, and Post Traumatic Stress Disorder.

During the recovery process, America’s severely wounded are pushed beyond their physical and mental limits on a daily basis. These individuals simply need more than the government is able to provide them, and Team WWP feels compelled to help by taking on this challenge. As someone that’s spent two years in Iraq, Cavanaugh will tell you that when people ask him what they can do for Iraq and Afghanistan Veterans, he doesn’t hesitate to advise that this is the best support program that he’s encountered.

To support Team WWP, visit it’s official Web site: www.mattcavanaugh-teamwwp.blogspot.com. This site provides access to race updates, photos, Cavanaugh’s training diary, and, most importantly, the link to Team WWP’s secure donation server where contributions can be made directly to the Wounded Warrior Project. A donation immediately generates a receipt for tax purposes.

“Please remember the African proverb: If you want to go quickly, go alone. If you want to go far, go together”, said Tom Cocchiarella, Team WWP partner. “Our support, together, can have a powerful, tangible impact on these severely wounded men and women. 2009 proved that and our 2010 season will be even greater. I humbly ask you to join us in support of America’s wounded heroes and their families. If people would donate one dollar per mile for one or more of the events we can continue to support our wounded veterans one mile at a time,” he added.