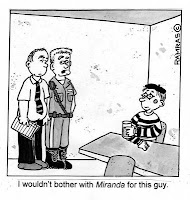 In Berghuis v. Thompkins (08-1470), the U.S. Supreme Court upheld the state court decision rejecting the claim of a violation of Thompkins’ Miranda rights. While soldiers have Article 31 Rights in the military, if you are questioned by civilian authorities – you will be looking to Miranda rights to save you.

Appellate Review: The Michigan state courts affirmed the conviction; in habeas proceedings the Sixth Circuit granted Thompkins’ petition. In reversing the Sixth Circuit, the Supreme Court first held that a defendant’s invocation of the right to remain silent must be “unambiguous.” Because Thompkins never actually said that he did not want to talk to the police, the Court concluded that his assertion of the right to silence was ambiguous. The Court next determined that Thompkins had knowingly and voluntarily waived his right to silence. Here, the Court reasoned, a valid waiver could be implied by the circumstances: “Where the prosecution shows that a Miranda warning was given and that it was understood by the accused, an accused’s uncoerced statement establishes an implied waiver of the right to remain silent.” According to the Court, “The fact that Thompkins made a statement about three hours after receiving a Miranda warning does not overcome the fact that he engaged in a course of conduct indicating waiver. Police are not required to rewarn suspects from time to time.” Lastly, the Court rejected the argument that the police were required to obtain a waiver of Thompkins’s Miranda rights before commencing the interrogation.